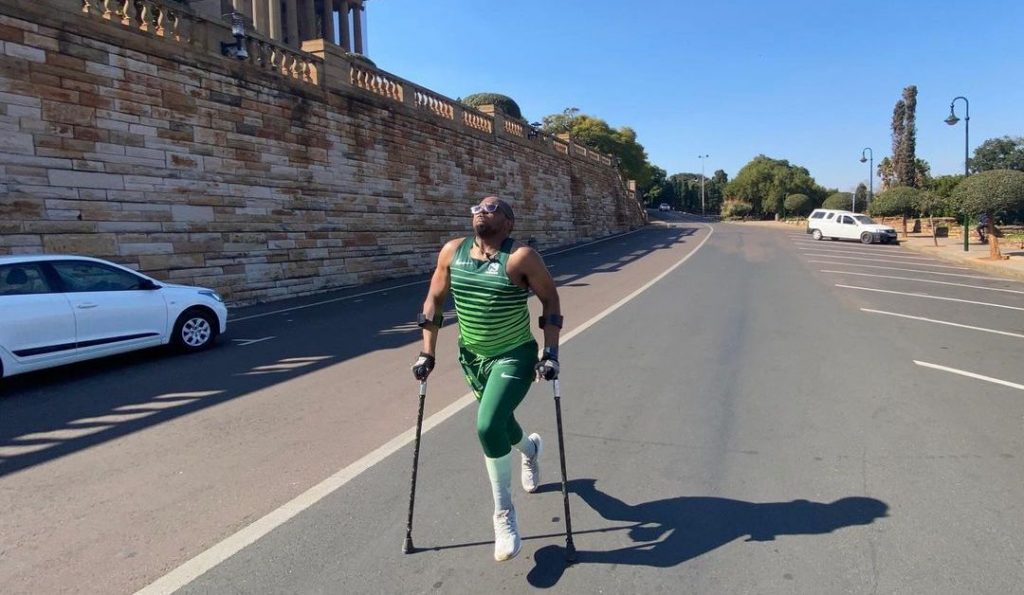 Ipeleng Khunou is known to be a “seriously fast runner”, as other writers have put it. Since realizing that he could run with crutches in 2017, he took off (literally), and hasn’t looked back. This confident and determined young man loves to exceed his own expectations, and prove to others that their assumptions about him were wrong.

Ipeleng, who goes by “Crazy Legs” on Instagram, lives with a rare disability called septo-optic dysplasia  that affects his balance, speech, eyesight and movement, and has had to rely on crutches throughout his life. However, they have never stopped him from wanting to be active, even when others put obstacles in his way. “When I was younger, I was told that I couldn’t run on crutches,” he recalls. “At the time, you could only either run on the track with your feet, which was impossible for me, or in a wheelchair”. Now an experienced marathon runner, Ipeleng has big dreams of running marathons all over the world, with his trusty crutches in hand. According to him, SideStix have made all the difference in the world in helping him be more competitive.

Ipeleng’s story of how he developed confidence is beautiful and inspiring. He credits his “amazing mother” with giving him plenty of opportunity to play with other children and be treated as an equal. He grew up understanding that he was special, but not in a way that made him more or less important than others. His mother taught him that a shiny coin is what people want to keep, but that doesn’t mean a less shiny penny is less valuable.

Community is everything to Ipeleng, and he knows that he can’t do anything without impacting those in his community. He references the proverb of ubuntu, which describes how everyone is connected, and one can only grow and progress while others grow and progress. He is dedicated to teaching and expanding the sport of running on crutches to children with mobility challenges. He hopes that these children will discover the magic of running that he discovered for himself as an adult. “To work with a kid and see their smile each time I work with them makes me so happy,” he says. “That’s the payment I look forward to, you know?”

What is your definition of ‘defy convention’?

In South Africa, the word ‘disability’ is almost used as an excuse to almost deprive other people of opportunities. For me, defying convention means that I will do whatever anybody else can do; I just do it differently.

Whenever I complete a race. Growing up, I’ve been told that I cannot do most things. I’ve always been a rebel, so instead of believing that, I do the exact thing that they said I can’t do. When I achieve something that they said I would not be able to do because of my disability, and I actually achieve it, I feel very powerful, especially if I’m able to confirm that to someone who’d look at me as a person with a disability and thought I shouldn’t be able to do it. It’s a nice feeling! 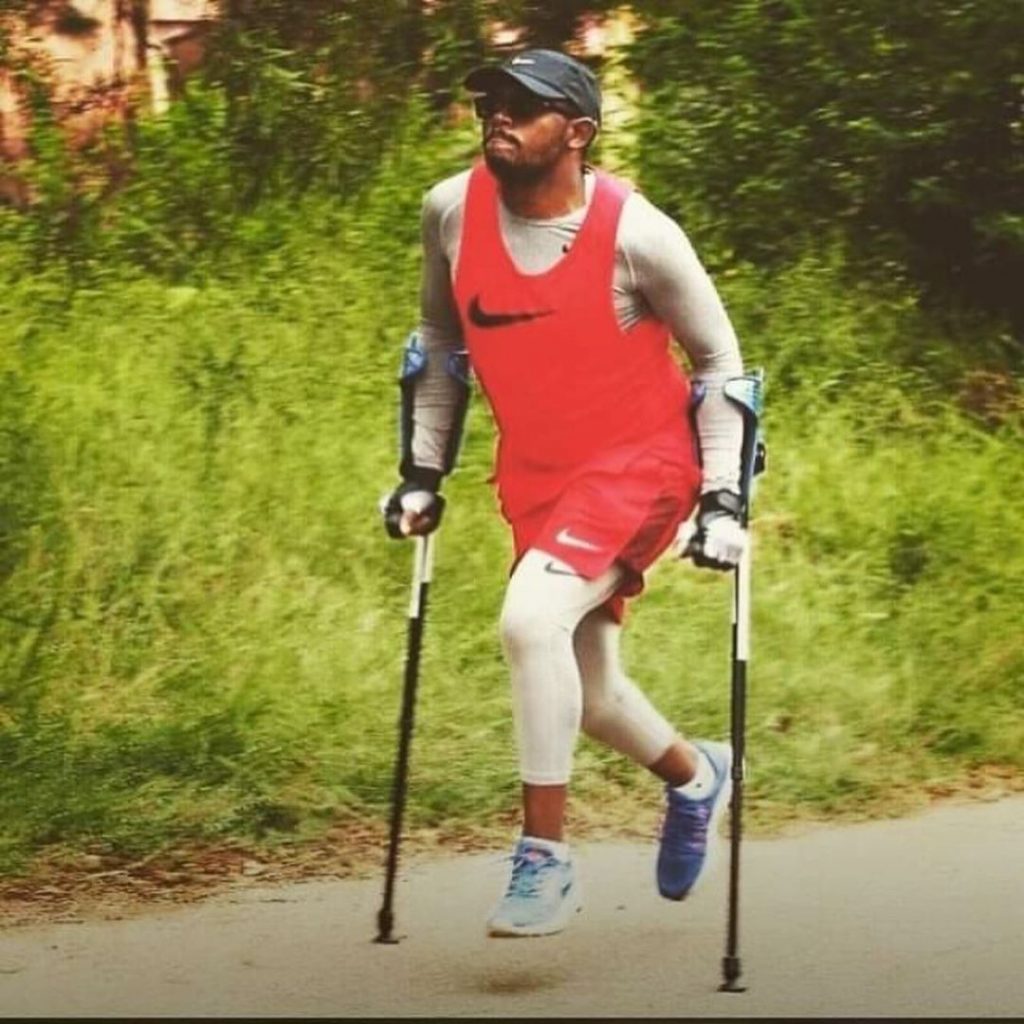 For me, inspiration comes from a group rather than a person. I love underdogs, so anyone who is seen as not being able to achieve, or someone who is just working against the odds and being able to beat them, just motivates me to go even further.

What is the importance of community to you, and how do you build that community?

What is one of your most cherished childhood memories?

I have an amazing mother. Growing up, children used to stare at me, and she used to make sure I was the kid with the most toys, because then kids would come and play at my house, so I was never lonely. She taught me a very important lesson by telling me, “People look at you because you are special”. She used the example of coins: the shinier a coin is, the more likely you are to keep it, or look at it more. It doesn’t mean that this coin has more value that the others, but because it’s different, people tend to hold onto it. That really helped me, and I think she really helped me to be quite… I’d like to use the word ‘fearless’. I didn’t struggle as much with my confidence, while some of the children, or my peers now, have struggled with confidence because of how they were initially brought up. Some of them were told they weren’t good enough, or went to the type of school where they were never exposed to non-disabled children. I mean, the schools would normally be in a place that was maybe 50km from a town, so they would hardly see the so-called “normal” kids there. I was really lucky.

What was the most valuable thing you learned from a negative experience?

In 2018, I had been training and wanted to run in parasports, but I was told, “you can’t run here because you are on crutches”. That was a bit sad for me, I mean, I wasn’t allowed to run in a disability community sports event to pursue my dreams. I’ve been communicating with other federations, but I often take this, my worst experience, and try to convert it into a better experience. There’s a campaign that I’m currently running where I collect crutches from soccer players, rugby players, and so on, and they donate them for kids along with a message to say, “I’m so-and-so, and I use crutches, and I want you to pursue your dreams”. I’m hoping that will inspire them. It’s things like that – you can’t just have a bad experience; you must be able to flip it as well.

With what’s happening with the Paralympics, running with crutches just hasn’t been thought of. It’s not like they’re saying “we don’t want guys on crutches”. It’s just a matter of opening a new category between the CP [cerebral palsy] guys that run, and the guys that are in wheelchairs. With the Paralympics, anything is possible! If you can have people that are blind playing football, anything is possible in sports. It’s about finding a fruitful way of communicating with everyone, and giving everyone a chance to participate in the paralympics. At the end of the day, the “para” in “Paralympics” stands for “parallel”, so I think anyone in life would want the chance to have that feeling of winning. When we run marathons, people clap for us, but at some point, it would be nice to win something, you know? I mean, any person in sports would want to have that recognition, to say “I also crossed the finish line in my category”.  I would love to see someone running on SideStix, specifically on SideStix because, I don’t want to lie, they are amazing! 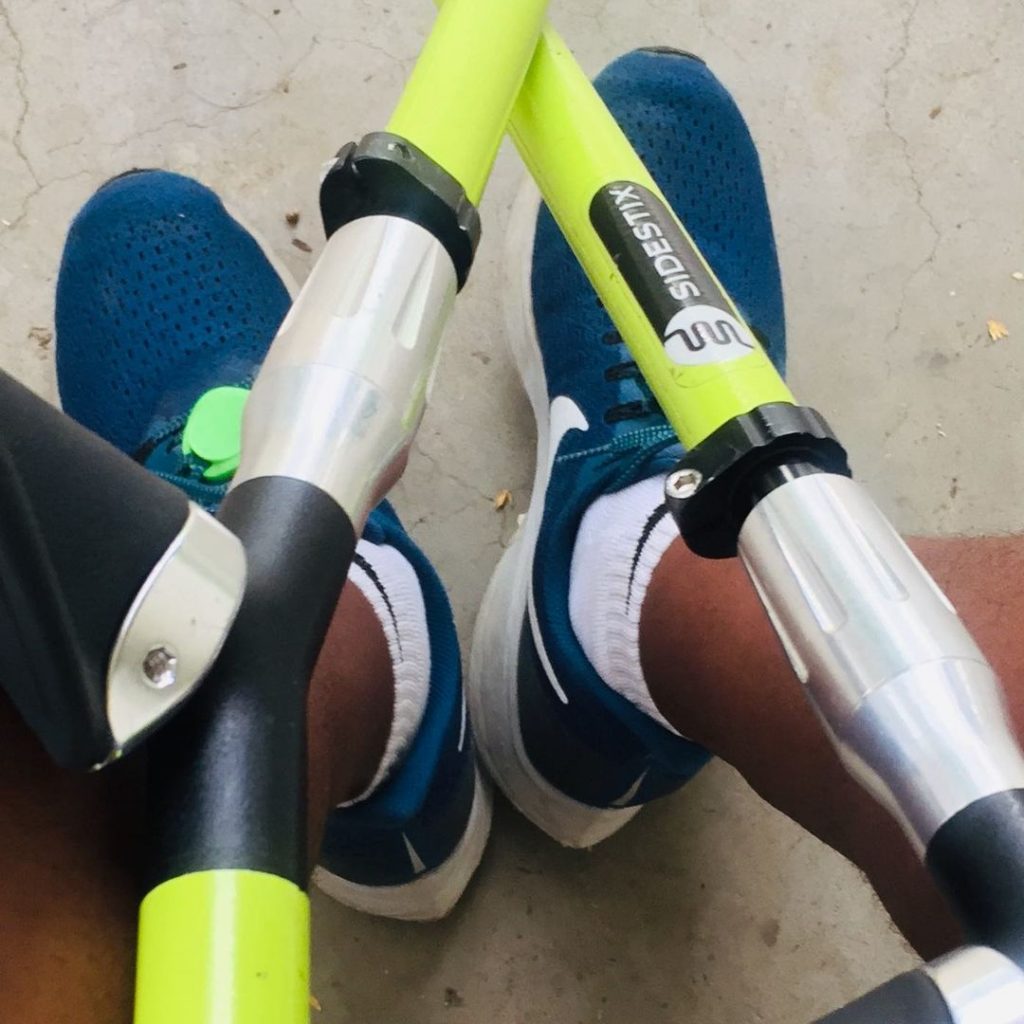 What’s your favourite part of SideStix?

Apart from the shocks, I would say it’s the tips. We call them ‘rubbers’. You’re talking to someone who’s used crutch rubbers all his life, and yours are the softest, yet hardest… they’re like marshmallows, but they’re NOT marshmallows. They’re tough, but yet durable. It doesn’t make sense in words! They’re the most comfortable things, because you can step on a stone, but you don’t feel like you’re on a stone. For me, it’s very important where I step because most of the time I’m running fast. Sometimes you’re stepping on an uneven surface, and with most rubbers you can fall a lot, even if it hasn’t rained. From what I’ve felt with SideStix, they tend to have more grip.

I can’t even put it into words, but they make a massive difference. The first time I ran with SideStix, I found myself having to ask people to please move so that I could pass, because they don’t make any noise!

What has been a defining moment in your personal or professional life that has changed the way you live?

Being invited to the UK by the Nelson Mandela Children’s Fund. The whole experience, running in London with a bout 100 South Africans shocked me, because I was literally the guest! People were happy to run with me, and it just taught me so much: to dream further than I had ever done before. I wanted to run, but did not see the world in that way, so this was just something that I really needed to push through. 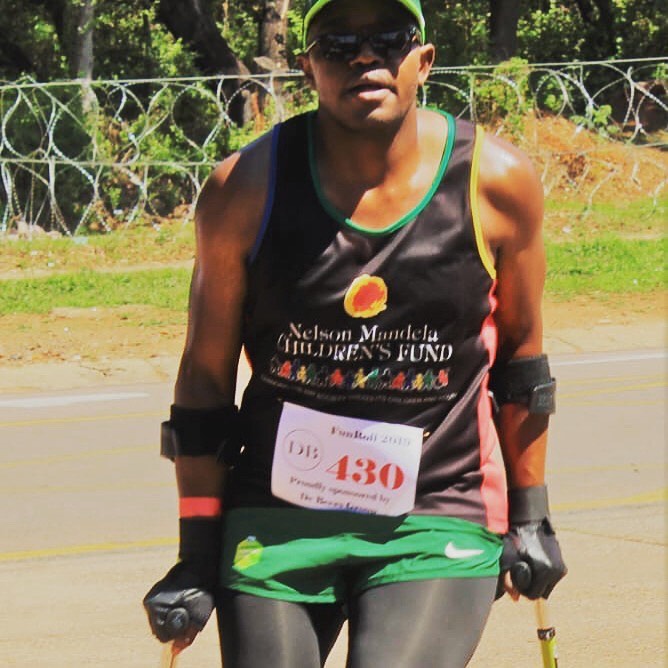 What is your definition of a perfect day?

My perfect day starts off at 4 o’clock in the morning, believe it or not! I put on my running torch [head lamp] and I’ll probably run for two hours. I need to have a run in the morning, then everything else can come. For me, a morning without a run is not going to be a good day. Whatever happens, I need to run first thing. I think some people will have coffee  – for me, I need to run before anything else! That’s where I do most of my thinking. I don’t have a manager or a PR team or anything, so that’s when I do most of my strategizing and planning.

How do you want to be remembered in history?

I’ve never thought about that! More than anything else, I would definitely love to give someone an opportunity to do something that they have never been able to do before. For me, that would be running things. I would love to be the guy who buys a young talented runner his first pair of SideStix, and teaches him all about how to run on crutches. I really enjoy taking people under my wing and just showing them around, giving them the freedom to dream, and inspiring them to do whatever they want to do, whether that’s running or something else. For me, it’s very important for someone to live their dreams, whatever they are. If someone loves their dreams, that makes me very happy. I enjoy running, so for me to work with a kid and see their smile each time I work with them makes me so happy. That’s the payment I look forward to, you know?

How do you stay motivated?

I left my job after this whole running thing happened, because I knew that there was no way I was going to be able to run at a level that I wanted to if I was working, because then I was just going to be a social runner. What motivates me is believing that it has to work out. It’s a dream. I think when you have a dream, you do not have a comfort zone. I need to work extra hard, because it has to work out!

Do you have any advice for other crutch users?

Look after your shoulders. It really helps to get the right type of crutches, and again, I would recommend SideStix. I mean, I do more running than most guys, but everyone knows that using normal crutches tends to mess up your shoulder plates and so on. I would definitely suggest that they get a second opinion! 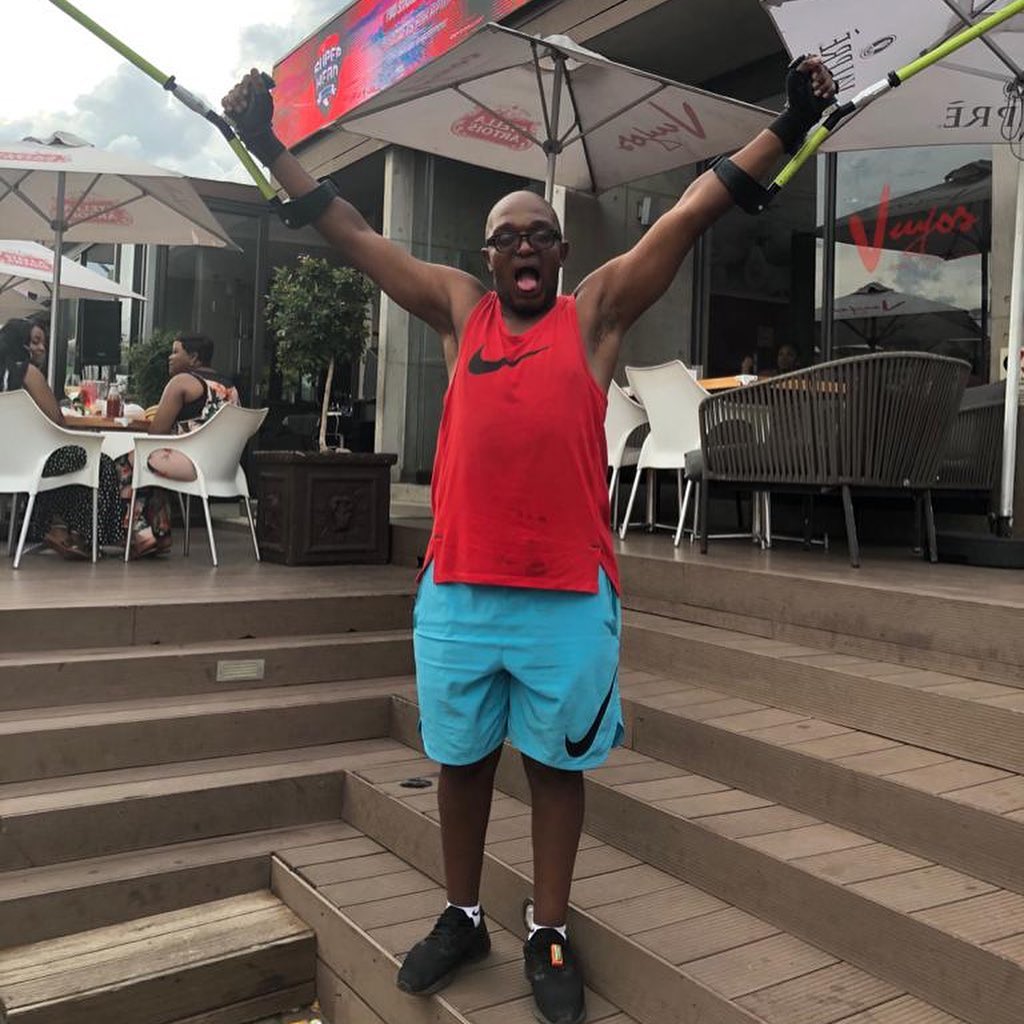 What are you most grateful for?

Being able to run! That might be a bit of a cliche. I was diagnosed in 2013, after being previously misdiagnosed, and after that point, it just made me realize just how lucky I am to be able to walk with my disability. They explained to me how rare it is, so for me, being able to move is something I celebrate each time I run. It’s something that maybe I don’t say out loud, but in my heart, I know what I’m celebrating. On paper, it’s something that my doctors have said is something I shouldn’t be able to do, and I am doing it. How can you not be motivated or thankful for that? 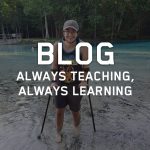 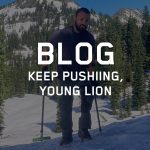 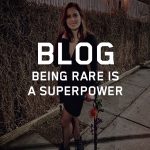