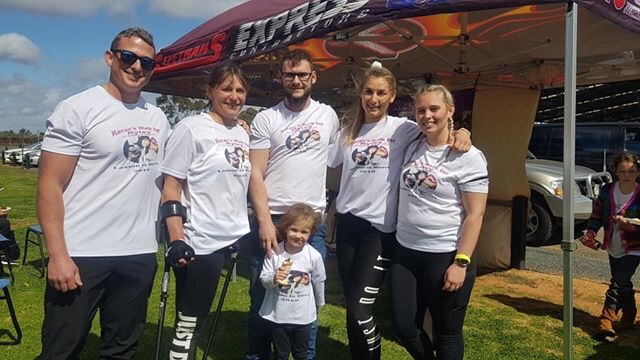 Cancer sucks – and reoccurring cancer sucks even more. It can be hard to push through, but Keran Villis has found a way to do it. Her strength and inspiration come from the children in her life, including one with terminal brain cancer. Children have the capacity to accept and adapt to the limitations in their life and as Keran says, she is motivated by watching them “just get on with it” when faced with challenges. She’s headstrong: if someone tells her she can’t do something, she’ll prove them wrong. She has defied the odds by living with cancer and taking on challenges most (including her doctor) believe she would never be able to do.

Keran stays active in her community and is empowered by giving back. “Everyone wants to leave a legacy in their life,” she says. “I ask myself how I do this, and it always comes down to giving back.” Keran fundraises and participates in half-marathons to support children with cancer, including the same ones that inspire her. “That’s how I have made a difference and will continue to make a difference,” Keran states. “I’ve always been like this. My cancer and amputation deepen this belief.” 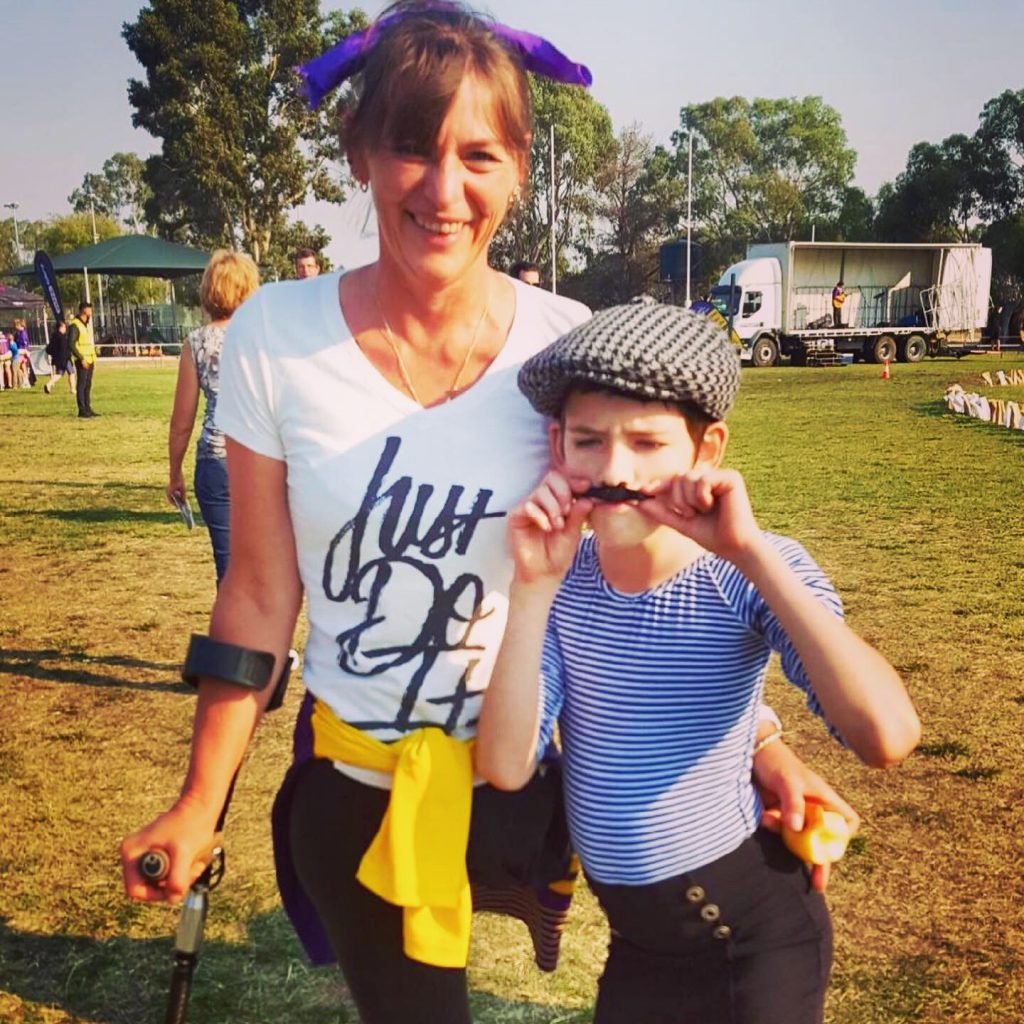 What’s your idea of defying convention?

If somebody tells me that I can’t, I will look for a way that I can. I lost my leg at the end of 2014, from cancer.  I do have lung cancer at the moment, but I just don’t let it keep me down.

I remember the surgeon telling me that I was going to be a partial paraplegic, and that I wasn’t going to walk again. I said, “What’s the other option?”. A friend of mine’s little boy had brain cancer at the time, so I said, “I’m going to do a fundraiser walk”, and the surgeon rolled his eyes and pretty much told me, “Don’t hurt yourself, I’ll see you when I’m cutting out bits of your lung”. He meant that the cancer would come back, because I have a very rare children’s cancer and the odds of surviving it are very small. But I thought, “Well, I can be one of the ones that survive”.

I’ve probably been defying convention all the way through. I’m headstrong, and sometimes I realize I’ve done too much. Last year I did a 14km walk, and three weeks later I collapsed. They thought I’d had a stroke, but it was the lung cancer. I felt ripped off, thinking that I’d beaten the cancer, and then whammo, it was back. I did get down a bit, but the life-saving thing was having my SideStix and just being able to get outside again. I’m not happy unless I’m outside! Thank goodness for these crutches! 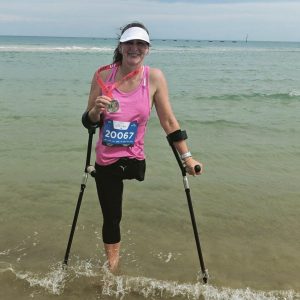 What’s your favourite thing about SideStix?

Obviously the sturdiness, because I’m a bit rough with them. I give them a hard time, but they’re very durable and have just become a part of me. I have the utmost confidence in them, whether it’s climbing up the side of a mountain, or hitting the pavement, or going down to the beach.

I have the sandshoe attachment, and the cleat tips, which I use for doing cancer walks, like Relay for Life, around the ovals. They’re good for when a lot of people are walking and the surface gets smooth and slippery.

What inspires you to keep going?

My children. I was a single mum for many years, and when I got the cancer originally, they were still at school. I didn’t think that my job as a parent was done yet, so that inspired me to keep going for them. And then there was my friend’s little boy who was so sick – unfortunately he passed away while I was unwell, and he was only 10 years old. As long as I’m doing something with the children in mind, and looking at life from their perspective, that keeps me going. Adults tend to sulk and give up, whereas kids just go, “Oh well, it is what it is,” and keep going forward.

When you’re a single mum, you want to be that role model for your kids, and show them how important it is to never give up. I’ve had a few low spots, but at the end of the day, I wanted to bring them up to be decent citizens, and you can’t do that if you’re not that role model. Everybody wants to have some sort of legacy, but it’s nice for your kids or any other children to look up to you and say, “Well, if Mum can do it, I can do it”. 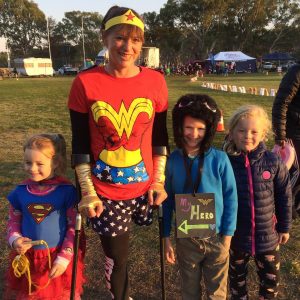 How important is community to you?

I thrive on positive energy. You need to surround yourself with a positive community environment. I don’t think we as humans could survive without a little community. That’s probably been the hardest thing during these COVID times. You can see how it’s affected mental health. We definitely need people around us, whether it’s some form of Zoom or Skype, or going out. For me, it’s doing the fundraiser walks, getting people moving, and encouraging people to talk. When you’re moving and talking, you find that people’s mental health just seems to lift. You could be having the worst day, then go for a walk with somebody and take a few deep breaths out in nature, and all of a sudden you just feel so free. I know a couple of people who also have cancer, and they’ve had low times, so I’ll suggest a walk. I obviously cut the distance back, so that it’s possible for them, but you can just see their smile at the end of it. When we’re doing the last few hundred meters, I’ll say “Well done! Achievement!”, and they’re just beaming. I think if you didn’t have a community to do that for you, it would just be so easy to withdraw. And I’ve had to learn not to do that myself. I realized, probably from the cancer, that I needed to open myself up and let people in to help me, and not feel bad because I needed help. 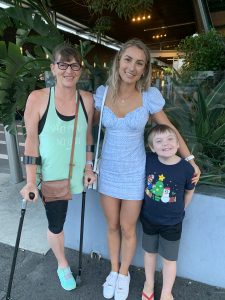 My kids and I have been through some terrible times. My previous situation involved domestic violence. It wasn’t a nice situation, but I think I’ve defied the odds of escaping, a couple of times now.  Up until I had my son at 21, I was virtually mute; I hardly spoke. But once I started to open up about domestic violence or sexual assault or anything like that, I realized I could help someone else come forward. I never wanted my children to be as withdrawn and shy and anxious as myself, so I encourage them to share whatever they’re feeling inside with someone else, because you never know what they’re going through. You could help someone on their own journey.

If there’s something I say that resonates with one person, and can make a difference to them, that’s all I could ask for. There’s a domino effect; you don’t realize how many people that you might be helping. Every day, I just wake up and think about how I can inspire someone today, even if it’s only something small. That helps keep me more positive. When you put a smile on someone’s face, it reflects back to you. I think that’s what I live for: to be of service to others. Even as a child, I was always looking to help others. But I think having the cancer and then losing my leg really deepened that sense, that this is what I’m here for. It’s about what you can do to make a difference in some way. 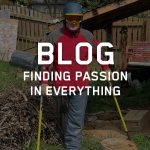 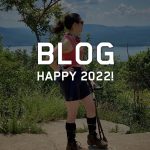 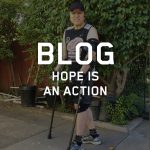